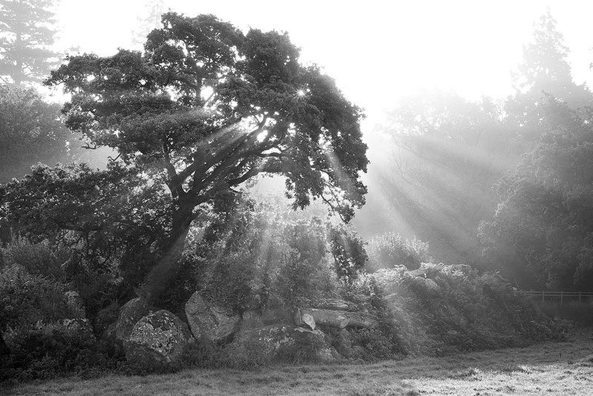 A LIFE WORTH LIVING? - Three Brothers
To anyone who, having read my experiences, might be inclined to retort that thanks to the Catholic church, my material needs were met: at least I was given a roof over my head, was clothed and fed, my reply is as follows:

‘Love, affection and emotional stability in the life of a child are not comforts, they are essential - in my experience and in my opinion, the very essence of a life worth living’.
Just coincidence?
When Annie and John Roy split up in the spring of 1948, she kept two children with her and left four, John, Fred, Ann and myself with our father who, presumably unable to look after us, sought the assistance of the Catholic Church and had us taken into ‘care’.

Whilst the two siblings, Betty and Eddy, who remained with my mother may have been ‘dragged up’ on the streets of Elswick – a rough, impoverished working-class area of Newcastle – they were at least able to grow up as individuals and live in the real world where they had the chance to interact with all types of 'every-day' people. Above all they were able to experience a whole range of normal human behaviour and emotions, which along with 'the bad' included affection, kindness, smiles, laughter, fun. Even if often left to fend for themselves, they had a sense of belonging, they knew their mother, and in her absence they at least had people they could turn to for a smile or a kind word; mostly good, salt-of-the-earth type neighbours who looked out for them. Both went on to become balanced indiividuals and to live 'normal' lives.

My sister Ann who grew up in St Joseph’s Home, Darlington, survived her existence - her ten years there - by making herself ‘invisible’.

As for us three brothers who were put into Catholic institutions, was it just coincidence that all three questioned whether their life was worth living; all three attempting suicide, two succeeding? Perhaps…perhaps not... 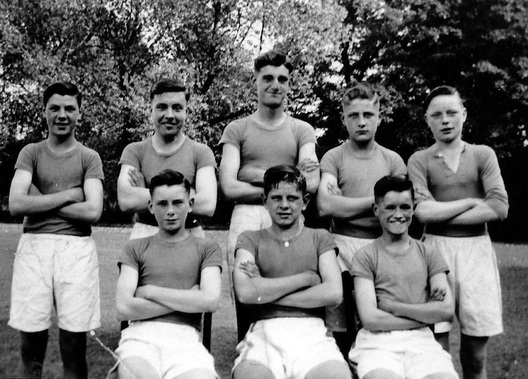 My elder brother, John Roy, first row to the left.
Of the Roy siblings, my brother John, the eldest, was 12 when put into St Mary’s. Presumably unable to break his spirit -
in view of his age he was neither a docile nor impressionable charge -  'unable to settle' as his records read -  John was discharged back to our father after just two weeks, soon thereafter to be sent to St Jospeh's Approved School for Boys in Nantwich (because of poor school attendance!) where he remained for two years. Discharged to our mother at the age of 15 John was finally taken in by relatives.

On August 5th, 1952, John committed suicide at the age of 16 – the title of the newspaper article with recorded his death read:
‘Tragedy of Loneliness’.  The article reported the incident as follows:

‘ …Mrs Annie Leatherdale, John’s aunt, had been asked if she would take her nephew, who had been in a home in Newcastle (error:  St Joseph's Approved Home for Boys, Nantwich) to give him a start in life…His uncle found him work at the local nurseries… he seemed quite happy. He liked working… but it was pretty lonely for him… said witness…

‘Face had Awful Look’
Just before he took his own life, a witness who saw him recalled:
‘He had a rather awful look on his face… ‘his face was greyish, and he had a guilty look, as though he thought I could read his mind.’
At about quarter to five he went missing. Witness… went in search of him and found him hanging in the apple store. ‘Death from asphyxia due to hanging himself while the balance of his mind was disturbed’.. was the verdict returned by the coroner. 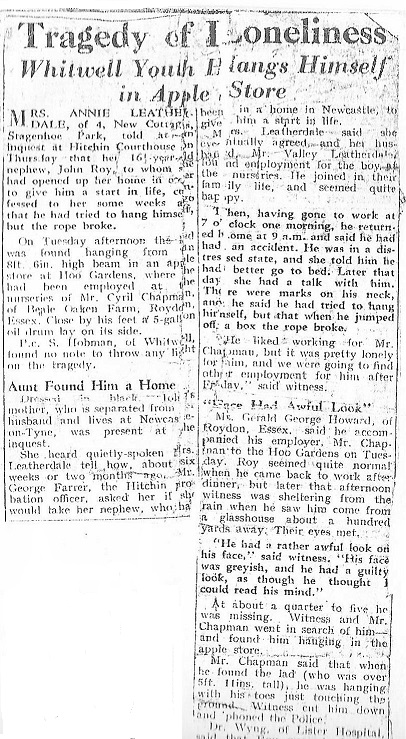 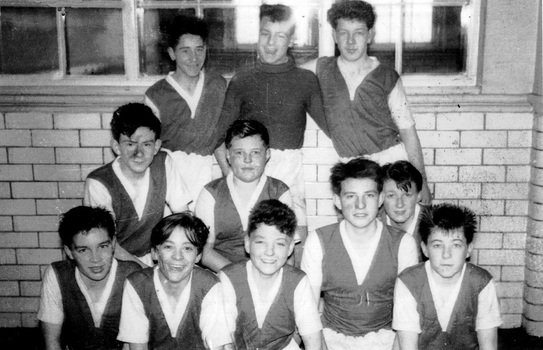 Brian Roy, centre back row.
Life in St Mary’s Home was not ‘lived’, let alone ‘enjoyed’ – it was endured. The endless years of gratuitous physical and emotional abuse were ‘survived’ – being ‘unloved’ was nothing because most of us didn't know any different until we left the confines of the home to be ‘dumped’ into the strange, outside world of ‘civvy street,’ of which we had no experience and for which there was no preparation.

Shortly after leaving the home, at the age of 16, I attempted to take my life by means of a huge overdose of tablets  - the spot I chose to do this I remember well: under an oak tree at four Lane Ends, Spennymoor.

When I came to in hospital there was no one there to offer a word of comfort, no one concerned about the reasons behind my act, no one to offer support, counselling or guidance. No, there was no one – apart, of course, from representatives of the church: I awoke to be berated and humiliated by the Catholic authorities for getting them a ‘bad name’ and was duly reminded that suicide was a sin…
1965 - FRED 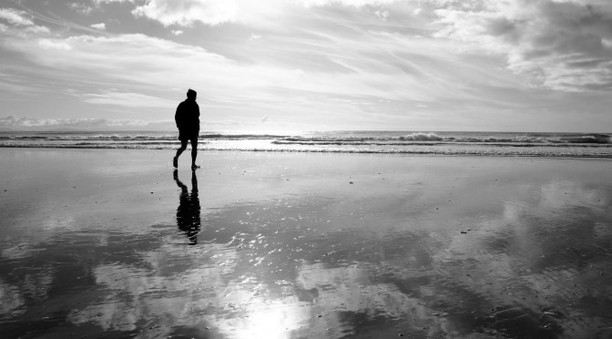 My brother Fred was admitted to St. Mary's home in April 1948 where he was to spend almost a year and a half before being placed with various foster parents - all 'good people' of 'the good faith' found through St Mary's Home.


...when I heard the news, I was at BFPO 41 in Lemgo, Germany. Regiment: RNF. Rank: Lance Corporal. Age: 19. The year was 1965 and he was 21. I got back from a day's rock climbing as a member of the RNF mountaineering club. I was approached by 2nd Lieutenant Wellwood, the duty officer of the day. He informed me my brother Fred Roy was dead or dying.

I was given compassionate leave to travel to Portsmouth to identify his body. I took my uniform with me to help me through this ordeal; my regiment was my strength. I arrived in Portsmouth and reported to a local police station. The duty sergeant was an ex-soldier who recognised my plight and kindly took me home to his family who cared for me during my stay.

Eventually it was confirmed my brother was dead, but at this stage I did not know how he had died. I was briefed by the police sergeant as to the legal procedures I would need to go through, and told that ultimately I would be required to identify my dead brother's body.

I was introduced to a very big gentleman with a mop of blond hair and a very large white beard. He was such a gentle, kind man, but he impressed upon me that when he would reveal my dead brother's body to me, I would have to make a positive ID. I was lead down into a cellar full of coffins, and then towards the one the body of my brother was in. As the cloth cover was pulled back, I immediately recognised my brother Fred. He was pale and dreadfully sad-looking.

Sparks! Flashes! A kaleidoscope of colours swirled around in my head and my knees buckled. I almost passed out, but I was in uniform and in very good hands, hands which helped to keep me from falling. I confirmed the body in question was my brother. I was then helped back upstairs into a hearing room. It was in this room that I was given the cause of my brother's death – suicide by gasing himself in a domestic oven at his lodgings. My head fell with the weight and shock of this appalling news. I slumped and split my head open, and was given first aid.

I attended the funeral of my brother to whom the authorities had introduced me just before I was due to leave St Mary's home - it was a very low key affair. Some of Fred's pals from work and other mates attended. They all spoke highly of my brother and were most upset by the tragedy of his death.

As for me, I returned to Germany, was interviewed by my company Sergeant Major, Bill Pringle, and was encouraged to soldier on and so I did...

Fred: to the world you may have been just one person, to me you were the world!